It is with great sadness that we have to report the passing of Channel swimming legend Barry Watson. He had been battling against cancer for some time but bravely remaining upbeat, still eager to help and encourage others.

Barry set the France to England Channel record of 9hrs 35mins in 1964 but, at the pinnacle of the sport, he was always ready to encourage the efforts of newbies just starting out on their endurance swimming journeys. He was that sort of great sportsman.

CS&PF secretary, Kevin Murphy, was one of those youngsters he encouraged when he swam Lake Windermere in 1964 and Loch Lomond in 1967. At Loch Lomond Barry was washed and dressed then back on the shores of the loch to welcome Kevin, the second and only other swimmer to finish in that year’s BLDSA championship. 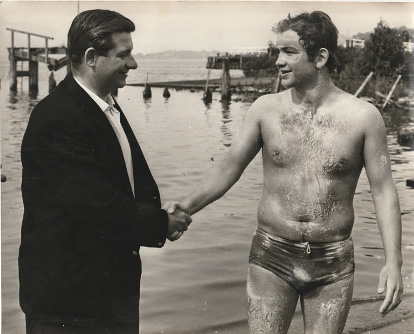 After breaking the Channel record he was a welcomed back in Yorkshire as a hometown hero by around 6,000 people.

He was a stalwart of the British Long Distance Swimming Association and helped greatly in the development of the sport of endurance swimming. Without Barry and others like him we would not have what we have today.

When he swam the Channel he was one of only nine swimmers to complete it that year and his record lasted for 18 years. He went on to complete a further three England to France swims in 1968, 1969 and 1970.

Barry was inducted into the International Marathon Swimming Hall of Fame in 1973.

In his 70s he had an ambition to get back into Channel swimming to break the record for the oldest person to swim the Channel. He said at the time: “I do not think I am going to stop now. Swimming is good for you. I still think I am 30.”

More recently and quietly, behind the scenes, he spent a great deal of time helping and encouraging other athletes and triathletes. He was proud to have helped the Olympic triathletes Alistair and Jonathan Brownlee.

We will miss Barry. We are proud to have known him.