26 hours of swimming in a water temperature of 15.1c 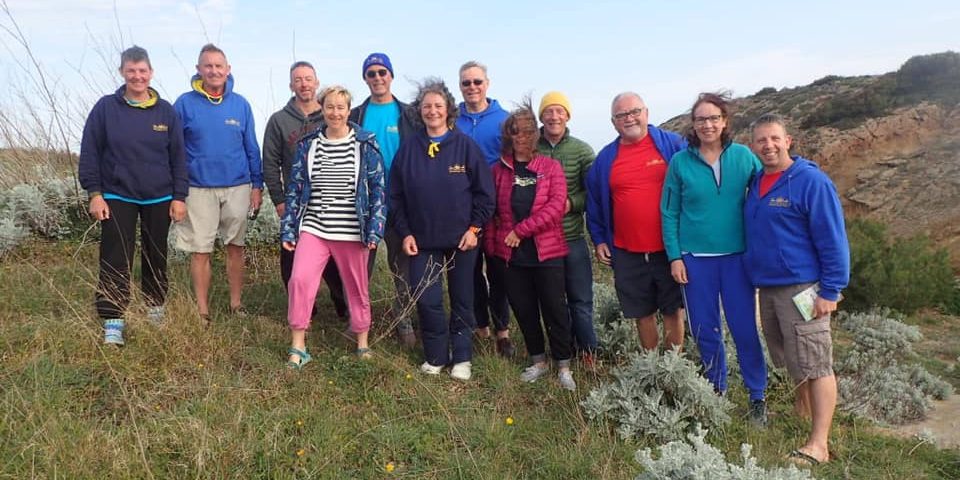 Mark Richards was a revelation. He took everything we threw at him, did it and emerged triumphant. So did Vanessa Daws, already with a number of swims on her cv and with a Channel swim booked this year. They both completed 26 hours of swimming in a water temperature of 15.1c on week one of our Menorca swim camps, including a six hour coastal swim near Mahon in challenging seas and six hours in a bay at Cala Galdana. Mark is a wet-suiter who is aiming to swim from Lands End to the Scilly Isles. Vanessa’s fellow-swim-campers voted her the most improved swimmer of the week and I was pleased to present her with The King’s Swimmers trophy.

Sisters Becky Wilson and Margaret Tesolin saved the best until last. In preparation for the Guildford 24 hour event Becky startled us all by swimming six hours with ease in Cala Galdana while Maggie did four hours – the first time either of them had completed those distances.

Mark’s wife Gillian Saville came to the camp described as ‘not really a swimmer’. She is now. In wet-suit and flippers she completed five hours.

Becka Augier was our ‘sprinter’ – aiming for the Scottish open water team. At the age of 14, and ‘not a great fan of jellyfish’, Becka completed 2hrs 30mins, chasing Mark all the way. She has the endurance. She has the speed. What can stop her?

Parviz and his team-mate Andre Jason are training for an epic three lakes relay swim this year – Loch Awe, Lake Windermere and Lake Bala – in aid of Parviz’s Cosmic charity (Children of St Mary’s Intensive Care). Both have already completed solo and relay Channel swims raising many thousands of pounds for this charity. At the swim camp they also hosted a great social evening in their apartment for the whole swim camp group with home cooked food to die for.

Paul Rowe has done six hours with us before and describes himself as a ‘frequent flyer’ at our swimcamps in Menorca – perhaps appropriate because he has switched from the sport of sky-diving to Channel swimming. This week was a trial run for medication to deal with sickness he suffers while swimming. The side effects told him a great deal and Paul learned what he needed to know. Paul has a Channel swim booked and can do it but he knows he has to believe that he can.

For Jane Mitchell it was also a trial week, proving to herself that she can get back into open water swimming. The next steps now open up for Jane.